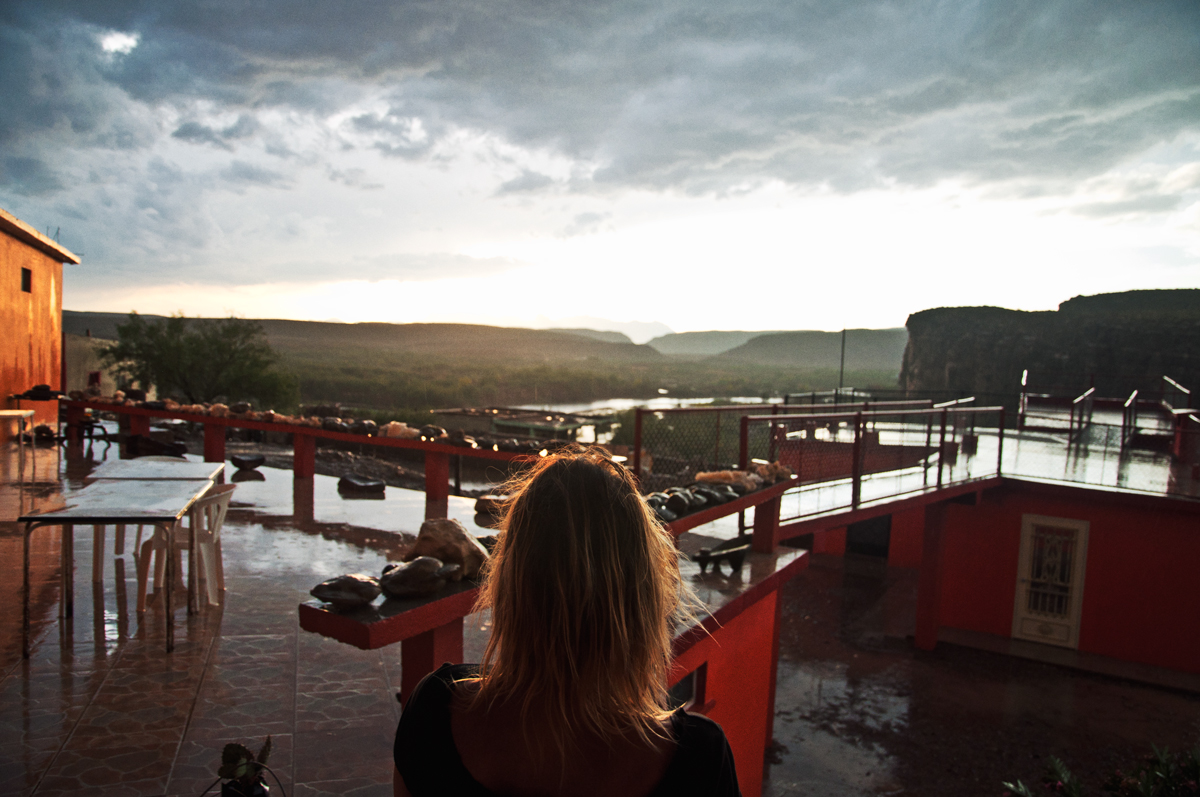 Let’s get this out of the way first:

Staying overnight in Boquillas is fun, easy, comfortable and like being in a time warp.

It’s as if the flat-bottom boat that the smiling guide delivers you to Mexico in is actually a magic device – like climbing through the back of the wardrobe in “The Lion, the Witch, and Wardrobe,” or climbing down the rabbit hole with Alice.

Boquillas is another country and another world- especially at night.

During the day, the sun is out.  Lilia and Bernardo, who own the best restaurant in town- Falcons, have a “George Womack installed” solar power system, and little solar panels dot yards all over town.

I went over to Boquillas along with fellow musicians Mike Davidson, George Womack, Laird Considine, Jeff Haislip, Charlotte Teer, to celebrate the 1 year anniversary of the opening of the Boquillas crossing.

For over a decade, after the paranoid psychopaths closed the border, Boquillas suffered economically.  All businesses except one bar closed, families either left or sent their children to stay with relatives in other towns.  The 30 minute trip to the park store for supplies turned into a 6-hour trek over bad roads.

I’ve written about this before- it was a cruel, stupid decision based on “lowest common denominator” politics and needs to be reversed…

And, now the crossing is open.

Going to Boquillas, Mexico is delightfully easy.  Through the police-state kiosk on the U.S. side, saunter down to the river, take a 3-minute boat ride, hop in a pickup truck for the 5 minute ride to Boquillas, get your pass from the happy, friendly guy in the trailer who works for Mexican immigration, and walk across the street to Falcons, give Lilia a big hug and grab a beer.

What is there to do in Boquillas?  My answer is that you don’t go there to DO stuff.  You can sit at Falcons, or another restaurant, and do absolutely nothing.  If you ask, Lilia or Bernardo will bring you food or beer.  To the North, the Rio Grande winds through Boquillas Canyon.  You can see for miles in all directions.  To the South you’re in a Mexican village that hasn’t changed much since the mine closed…  there are more horses and burros than cars and trucks, there are no shops, no internet, no cell service…

You can walk around.  Possibly hire a horse and guide and go visit the mountains.

Me, I like to sit on the new observation deck in the shade, pick a direction with a nice view, and just let my normal, business-running/consultant/author life just lift off me like water evaporating in the hot sun after a rain.  Most of the conversations are in Spanish, which I don’t speak, so I can safely ignore them… it’s like a gentle buzz of soft sounds… I can watch the children play or ride their burros, watch the light on the centuries old cracked adobe, notice how the sun plays through the dust kicked up by the pony trotting through town..

This trip, we played music for the fiesta to celebrate the 1-year anniversary of the border crossing. During the day, Jeff and Charlotte played under the gazebo as tourists wandered around the plaza. The women of the village had made their special recipes and food and beer were for sale.  Plenty of shade.  The wind coming off the river was cool.

After a break for dinner and tequila shots at the Park Bar, we were setting up our gear for the dance when the clouds started gathering to the West… and getting closer and closer… and we could see several rain events happening…  optimism ruled until the first drops hit and then it was like being in a hurricane…

Band members and friendly locals gathered some tarps, put the music gear in the center of the little gazebo, and held on for dear life as the rain and hail beat down…

After about 350 hours of this… well, probably just half an hour, but time passes differently when you’re in a hailstorm, I decided I wasn’t going to get any wetter if I walked to Falcons.  There are several stairways between the plaza and Falcons, and they had turned into waterfalls.  By the time I got to the restaurant my blue jeans weighed about 30 pounds, my socks were soaked…  and I was laughing.  You don’t get soaked to the skin in a Mexican village every day…

After a while, the other musicians made their way back in various stages of undressed and soaked. We figured that was it, but the rain eventually quit.  A rainbow came out.  Dry t-shirts were discovered. A couple of shots of tequila for courage, and we were back in the plaza hoping our wet guitars and amps didn’t shock us.

We played by the light of a kerosene lamp, powered by a gas generator, which occasionally took a break.  The dancers danced in the puddles of the plaza in the dark…

Mike Davidson led the band in a couple of hours of cumbias and other Mexican songs.  Mike, George and Laird play in the band called Los Pinche Gringos. Ted Arbogast, their usual leader, wasn’t able to make the trip, so Mike dug deep and kept the cumbias coming.

I played a couple of blues songs, but… hint for gringo musicians… the locals really like the music that they really like.  Country and blues were politely tolerated.

After the show, and a little more tequila, we all crowded into a truck and were deposited at our rooms for the night.  There are several places to stay in Boquillas.  Most of us ended up in La Zappolita – the former Buzzard’s Roost.  Several private rooms, clean bathrooms, no electricity, and your $25 fee for the night includes a huge breakfast with home-made beans and rice, tortillas, and tamales.

Then, back to town, more coffee at Falcons, back to visit the cheerful guy at Mexican immigration, then lots of help loading the music gear in trucks and getting in the boat…

Then, the long slog uphill carrying guitars and amps to the U.S. border station where…  (edited) let’s just say that the U.S. could learn a lot from Mexico about how to welcome its citizens back to the country.

Then, the gorgeous hour+ ride through Big Bend National park and then home.

6 Replies to “Boquillas Overnight – dancing in the dark.”