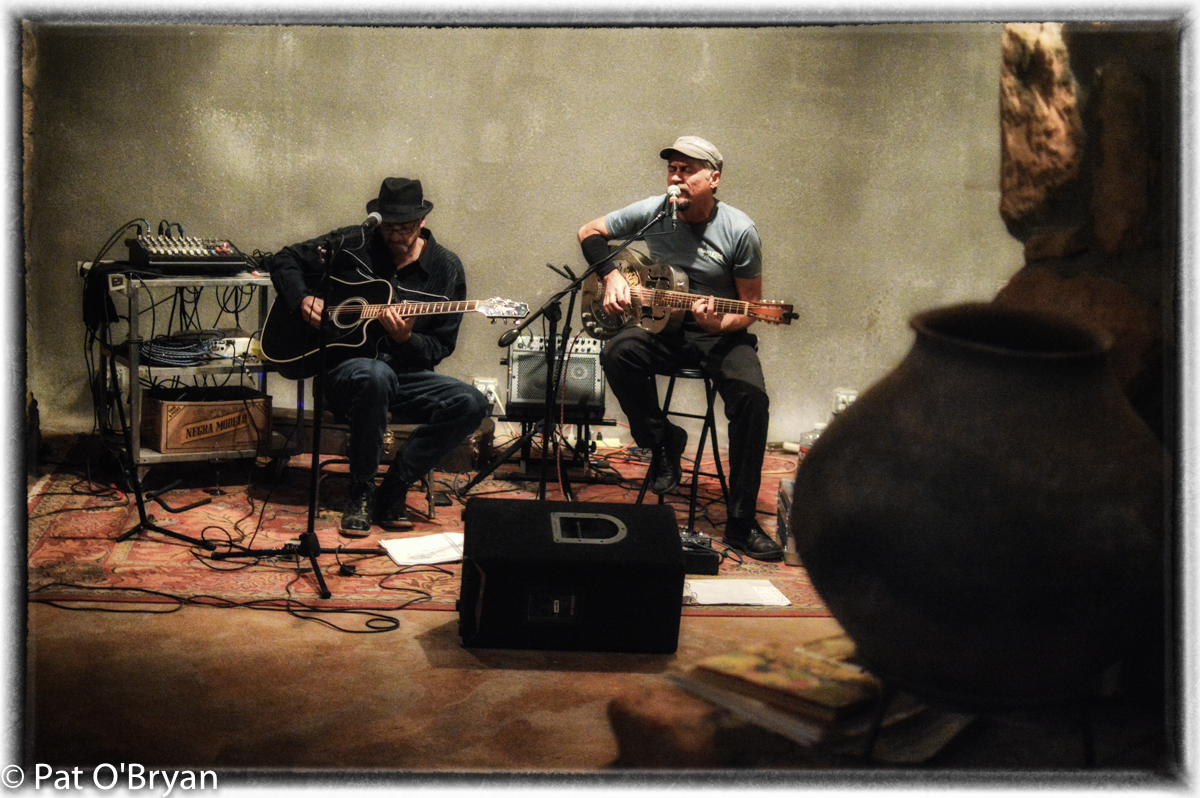 The combination and contrast of Trevor’s Texas-influenced Americana and Bruce’s Gypsy-Eastern European tinged folk was interesting and enjoyable.

I play regularly with Trevor and occasionally with Bruce, and was particularly paying attention to how they supported each other- they came up with options I hadn’t thought of. Bruce’s leads are often modal, and a little “outside” the normal scales that Trevor’s songs would suggest. Trevor’s approach to Bruce’s chord structures brought his songs more “inside.”

About the new La Kiva-

Like most Terlinguists, I’ve been watching the reconstruction and development of the new La Kiva with interest.

From the emotional devastation of Glenn’s murder, the unbelievable trial, the crass reality show, to the physical changes that were necessary to make La Kiva a functional and viable restaurant and bar- we watched the changes and wondered what the outcome would be.

Is it the same as it was?

There’s a new state of the art kitchen, the bathrooms are at the other end of the building, and they’re shiny and clean. The food is good, but very different from what Glenn served.

There’s a new roof, the cave room has been repaired, a few walls have been replaced.

New owners, John and Josie Holroyd, have spared no expense in renovating La Kiva, and done their best to retain the decorations and vibe that made La Kiva memorable- down to the Penisaurus Rex fossil embedded in the wall.

It’s very cool, but it’s not the same. There’s no way it could have been.

As a restaurant and bar, La Kiva is ready for prime time.  I’ve had the pizza and the burger, and can testify that they’re delicious. The service is friendly.

As a music venue, it’s almost there.

As a local musician, I’ve got a self-interested opinion about this. Talking to other musicians, I’ve found that they pretty much universally agree.

Once of the things that defined La Kiva for the musicians who played there was the “in your face” immediacy- the band set up in the middle of the dining area a few feet from the bar. The audience would sit maybe 4 feet or so from the band. The interaction between performer and audiences was instant and visceral.

Now the band plays where the bathrooms were. A performance volume that carries past the bar can be a little loud if you’re in the room with the band.

The room itself is hot and live, with reflective surfaces and no sound absorption – rugs, etc. – to stop the echoes. There’s no monitor speakers, so the band hears the reflections from the stone walls.

These are minor details, easily remedied.

Congratulations to John and Josie, you done good.

One Reply to “Trevor Hickle and Bruce Salmon at La Kiva”